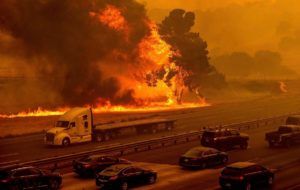 “There are a ton of farms that are located in the fire’s path. No one’s out of the woods yet. This is just starting,” said Keala Peterson, whose small, family-run cannabis operation, Sweet Creek Farms in Sonoma County, was damaged by the fires.

Peterson noted that many of the largest fire complexes were either not contained at all or only slightly contained by firefighters, a situation that exposes cannabis farmers to significant financial losses because the outdoor crops aren’t necessarily insured.

Peterson said Sweet Creek Farms lost about four-fifths of its marijuana crop to the fire on Wednesday but noted that firefighters were able to save part of her family compound.

“It looks like a wasteland,” she said. “Pretty much, it’s a total loss.”

Peterson said her cannabis crop isn’t insured, and she estimated her family will likely absorb about $150,000 in losses, perhaps more, if they aren’t able to salvage the unburned marijuana that has yet to fully flower.

“We’re guardedly optimistic that those (unburned marijuana plants) could come to term, but with smoke damage, if the bud has set enough, it’ll just be smoky marijuana, and nobody wants to smoke that,” Peterson said.

Still, she’s not too worried about the future of Sweet Creek because her family has a diversified income and doesn’t rely solely on cannabis.

The fires, many caused by lightning and sometimes pushed by strong winds, have burned hundreds of thousands of acres as they chewed through brushland, rural areas, canyon country and dense forest surrounding San Francisco. Fires also burned in the Sierra Nevada and Southern California wild lands.

Another Sonoma County cannabis farmer replied to a call for comment with a text message that said, “I’m evacuating. Sorry I can’t talk now.”

To the south of San Francisco, in Santa Cruz County, longtime medical cannabis nonprofit WAMM Phytotherapies also likely lost a farm, said founder Valerie Corral. But she’s not even certain of the farm’s status because she had to evacuate Tuesday night.

“We just found out that probably everything burned” at WAMM’s farm in northern Santa Cruz County, she said, adding that a second farm, in southern Santa Cruz, was still untouched.

“It’s pretty awful here in Santa Cruz,” Corral said. “I have to be thankful that no one’s life has been lost.”

The WAMM farm was also uninsured, but Corral said she and her organization have been through worse and they’ll get back on their feet, one way or another.

Yet another series of fires in Yolo County, directly west of Sacramento, is threatening Preferred Gardens, said owner David Polley.

He said Thursday he’ll have to deal with smoke damage to at least 2,000 of his 12,000 plants, which he said might have to be destroyed.

What he’s worried about is the possibility of the winds shifting and that the fires might turn and begin heading south toward his farm.

“If this fire doesn’t get under wraps, then everything is going to go down,” Polley said. ” We’re just going to pray that doesn’t happen.”

If it does, Polley said, it could put his losses in the millions of dollars and potentially put him out of business.

“I’ve been through all different kinds of hell,” he said. “This is just another day.”

John Schroyer can be reached at johns@mjbizdaily.com

The Associated Press contributed to this report