Blog
You are here: Home / Blog / About Cannabis / Cannabis got a big win in Congress, but legal weed isn’t around the...

San Francisco (CNN Business)Cannabis just had a victory in Congress. But the industry and its supporters may not want to get too excited just yet. 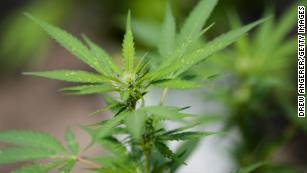 Four more states just legalized recreational weed. Here’s how long you’ll have to wait to buy it
For now, the House is likely to be the last stop on the line for the Marijuana Opportunity Reinvestment and Expungement Act of 2019 (MORE Act), which would effectively legalize cannabis by removing marijuana from the Controlled Substances Act and creating a shared federal-state control of cannabis programs — although it does not force states to legalize. The bill also would reduce barriers to research, solve current banking and tax woes, expunge some cannabis offenses and further diversify efforts in the industry.
Although public sentiment for cannabis legalization has grown, not all in Congress — notably Republican Senate Majority Leader Mitch McConnell — feel the same.
Any bill not signed into law by the time Congress adjourns on January 3 will have to be reintroduced, so that most likely will be the fate for the MORE Act or any other prominent cannabis-centric legislation, said Jodi Avergun, a former US Drug Enforcement Administration chief of staff who is now a partner at Cadwalader and chair of the law firm’s white collar defense and investigations group.
“In my view, more than anything, the House wanted to show the incoming Biden administration that it is serious about cannabis reform and that it expects the administration to advance the ball on legalization or descheduling,” Avergun told CNN Business. “Folks were disappointed that Biden’s transition documents did not reiterate the cannabis loosening pledges he made during the campaign. Maybe this is a subtle statement that the House did not forget what Biden had promised during the campaign.”
However, while industry advocates hailed the passage of the bill, not all were pleased with some last-minute revisions that they say watered down the criminal justice and social equity provisions of the bill, including narrowing where tax dollars can be appropriated and who would be eligible for records expungement, said Maritza Perez, director of the office of national affairs at the Drug Policy Alliance.
“While we recognize and celebrate the historic nature of today’s vote, we know we need to put in significant work in the next Congress to build a bill that fully aligns with our principles,” she said in a statement.

Still, Friday’s action is considered a significant win for both legalization advocates and the advancement of the legal cannabis industry.
It also was the first time that a chamber of Congress has voted on a standalone cannabis bill.
“We move by inches,” Chris Walsh, CEO and president of industry trade publication Marijuana Business Daily, said in an interview. “Each inch is significant in an of itself, but they have to add up together before you get to the big win.”
While the federal needle may be advancing tick by tick, at the state level the cannabis industry has grown by leaps and bounds in recent years — and 2020 has certainly been a significant one for the industry.
In the early stages of the Covid-19 pandemic, cannabis businesses were deemed “essential” in many states and allowed to stay open to serve medical patients and recreational customers. Sales continued to climb and set new records in mature markets such as Colorado.
In November, cannabis legalization measures succeeded in a clean sweep at the ballot box, with voters approving recreational cannabis proposals in Arizona, Montana, New Jersey and South Dakota and medical cannabis measures in South Dakota and Mississippi. Now, all but three US states have legalized the medical use of cannabis and 15 states have passed adult-use measures.
The US cannabis industry is expected to post north of $19 billion in sales this year, according to projections from the Brightfield Group, a cannabis industry market research firm.
It’s a far cry from eight years ago when only 18 states had medical marijuana laws in place, voters in Colorado and Washington state were the first to OK recreational cannabis programs, and CBD and edibles were not part of the common lexicon.
“When you’ve got a growing number of states going green in some way or another, that’s what pushes federal change,” said Walsh, of Marijuana Business Daily.
Earlier this week, the United Nations Commission on Narcotic Drugs removed cannabis from its schedule of dangerous drugs, a move that could accelerate global medical cannabis research and legalization efforts. That decision could affect how the US DEA approaches cannabis, Avergun said.
https://elevatedsf.com/wp-content/uploads/2020/12/ai2html-graphic-desktop.63a0cc03.jpg 1192 1560 Brian Wong https://elevatedsf.com/wp-content/uploads/2019/05/logo.jpeg Brian Wong2020-12-14 00:09:592020-12-14 00:09:59Cannabis got a big win in Congress, but legal weed isn't around the corner

San Francisco to ban tobacco smoking in apartments – but not cannabis