Our dispensary has a patient (and now recreational user) first perspective. Each individual patient or recreational customer that comes in is treated as an individual. We tailor the experience to you and your needs. We strive to make your trip to Elevated San Francisco enjoyable whether you are a cannabis pro or are walking into a dispensary for the time. You won’t be rushed, but can be in and out quickly if you are in a rush. We provide safe access in a comfortable and friendly environment.

At Elevated San Francisco we offer a patient-driven perspective at our dispensary to provide natural remedies for medical marijuana patients (ages 18 and up) and recreational clients (ages 21 and up) through the highest quality selection of fresh flowers, hash products, vape cartridges, transdermal offerings, smoking accessories and more to maximize your experience. Our knowledgeable staff is proud to service the San Francisco Bay Area from our dispensary, bringing a unique passion for the premium product assortment we carry and also for creating a personalized self-care routine utilizing medical and recreational marijuana products to improve your comfort, relaxation and medical management.

Here at Elevated San Francisco our products are truly our passion and we are thrilled to serve the Bay Area with the highest quality cannabis products sourced from the far reaches of Northern California’s micro climates. This biological advantage allows us to offer a unique and varied experience for each of our customers in our array of edibles, concentrates, vape products, tinctures, transdermal topical products, pre-rolls and more!

The difference is evident in our rotating seasonal menu – no matter what your tastes and preferences we have something to suit every lifestyle and personality. 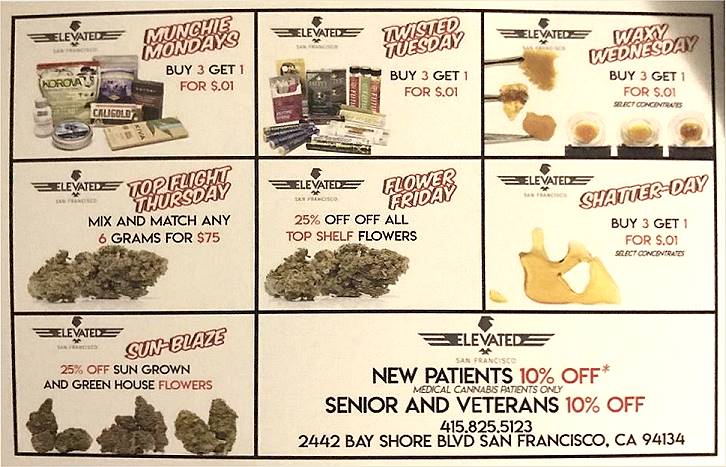 San Mateo, CA was incorporated in the year 1864. Originally part of two large Rancheros, the city now has a population of approximately 100,000 residents, making it one of the larger suburbs in the San Francisco Bay area.

The first official business enterprise was started in 1849, a stagecoach stop built in what is now an abandoned mission. The train soon followed, linking San Mateo to San Francisco in 1863, and the area was originally built up from wealthy San Franciscans looking for an area with a mild climate to build homes for summer use or as a permanent residence. San Mateo fit the bill.

Following are additional sources of information and other San Mateo resources: