Blog
You are here: Home / Blog / About Cannabis / Why more states could legalize cannabis in 2021 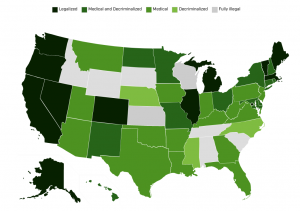 Actions by states to reduce criminal penalties for marijuana use and possession are fueling momentum for the broader movement to legalize cannabis and have it serve as an economic engine for cash-strapped coffers, industry members and policy experts say.

“I expect a record number of states to legalize marijuana in 2021, in part due to the financial pressures, along with the racial injustice imperative to reduce unnecessary police-civilian interactions,” said Karen O’Keefe, director of state policies for the Marijuana Policy Project, the lobbying organization behind many state cannabis policies in place today.
In recent weeks, a spate of US states have sought to relax decades-old drug laws that criminalized cannabis use and possession and disproportionately jailed Black people for non-violent offenses.
Nevada pardoned more than 15,500 people who were convicted of carrying less than an ounce of cannabis. Georgia lawmakers added decriminalization to a police reform bill that faces a challenging path to approval, considering that state’s Republican-controlled General Assembly and that the legislative session ends on June 30, the Savannah Morning News reports.
Decriminalization legislation also is advancing in New Jersey. In Colorado, a bill aimed at diversifying the state’s legal cannabis industry was amended with a provision that would allow Democratic Governor Jared Polis to expunge residents’ low-level cannabis convictions.
Virginia’s new decriminalization law also includes provisions to create a work group to evaluate the potential impact of cannabis legalization.
In recent years, the calls have grown for firmer policies addressing social justice and social equity concerns by reducing the number of people imprisoned for non-violent cannabis offenses, directing tax revenue to communities harmed by Drug War policies, and increasing the number of minority business owners and employees.
“Equity is something that should not be an afterthought,” said Amber Littlejohn, senior policy adviser at the Minority Cannabis Business Association.
Even Kevin Sabet, co-founder of Smart Approaches to Marijuana, which opposes full-scale cannabis legalization, told CNN Business the organization is supportive of recent efforts to decriminalize minor possession of cannabis.
“Decriminalization begins the process of healing past harms while also forgoing the creation of a new, predatory industry keen on marketing extremely potent marijuana products,” he said via email.

Legalization on the ballot

Legalization advocates have long touted the righting of past criminal justice wrongs, eliminating illegal market activity and generating additional tax revenue when they’ve pushed for the overhaul of state cannabis laws.
“At the end of the day, economics talk and jobs talk,” said Jessica Billingsley, chief executive officer of Akerna, which makes regulatory compliance software that helps states track cannabis sales from seed to sale. “I truly believe we’re going to see some very meaningful and important movement coming out of this as states and governors look for a way to bolster their economy.”
Cannabis sales in states that have legalized the plant for medical and recreational purposes totaled about $15 billion in 2019, and are expected to top $30 billion by 2024, according to data from BDS Analytics, which tracks dispensary sales. At the start of 2020, the US cannabis industry had an estimated 243,700 full-time employees, according to cannabis information site Leafly.
More than half of US states have medical cannabis laws in place, with 11 of those allowing for adult recreational. Those numbers — and the overall size of the industry — were expected to grow in 2020; however, efforts such as those in New York have been waylaid because of the coronavirus pandemic.
And while New York legalization efforts are temporarily shelved, New Jersey and South Dakota residents are expected to vote on recreational cannabis legalization in November. Mississippi is scheduled to vote on medical marijuana, and legalization campaigns are gathering and submitting signatures for medical measures in Montana and Nebraska and for a recreational measures in Arizona.

The cannabis industry’s performance during the pandemic that has lent credence to a growing notion within the industry that cannabis may be recession-proof and could be a boon to beleaguered budgets.
Cannabis businesses were deemed essential in most states where the drug is legal. Despite some initial volatility from mid-March panic-buying and a subsequent short-term drop off, sales have remained steady, if not robust. Sales were up 26% in Washington State and 46% in California, according to a June market report from Stifel analysts, citing data from analytics firm Headset.
But cannabis legalization should not be viewed as a cure-all for state fiscal woes, policy experts and economists caution, adding that creating a robust, safe and sustainable industry takes time.
Facing economic turmoil, municipalities and states are trying to get creative with revenue generation, imposing taxes on activities such as sports betting and products like vaping devices, said Ulrik Boesen, a senior policy analyst for the Tax Foundation. And while cannabis regulation could pull in new revenue — estimates put the illicit market at $60 billion — the benefit to states won’t come immediately, said Boesen, who authored a recently published white paper on recreational cannabis excise taxes.
“This is no short-term solution, because it takes time,” Boesen told CNN Business. “If you’re looking at a fiscal year 2021 that you’re worried about, legalizing marijuana isn’t going to be a solution.”
Cannabis policy development and regulation can be a delicate dance. Taxes have to be high enough to ensure proper regulatory guardrails and enforcement, but not too high to keep consumers in the illicit market, said Salmeron Barnes, managing director of MPG Consulting, which works with states and cities to develop cannabis regulatory regimes.
Earlier this year, Barnes floated the idea of creating cannabis municipal bonds to help cities generate additional revenue.
https://www.cnn.com/cannabis-legalize-2021-recession